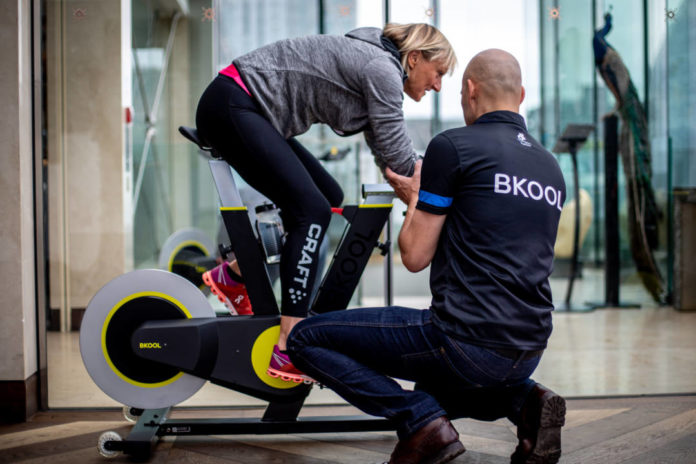 FTP, an acronym for Functional Threshold Power, is one of the most universal terms in cycling. To sum it up quickly, FTP is the average power that a cyclist can maintain for one hour, and it’s widely accepted as a primary indicator of physical fitness. It’s also a vital tool to help establish your power zones and design training sessions most effectively.

To find your threshold, the most common way is to perform an FTP test. Although you could simply ride a one-hour time trial, very few athletes can cope with the physical and mental demands of such a test, so most coaches resort to a shorter, predictive test.

There are several FTP tests out there, but the most common are the 20-minute and 5-minute tests. They can be performed either outdoors or indoors, on a trainer. The latter option is one of the best because you eliminate external variables that can interfere with the results. At BKOOL, we’ve pre-built 20 and 5 minute tests, and you can perform them on BKOOL in either a workout or velodrome simulation.

However you conduct your FTP test, it will always be a challenge (if it isn’t, you aren’t going hard enough). Sustaining maximum power for any period of time longer than a few seconds is never easy.

Performing a realistic FTP test is complicated, because you have to push your body to exert maximum effort without going over your limit. That requires experience, preparation and strategy.

If you’re thinking of taking one of these tests to find your functional power threshold, here are some tips that can help you perform an FTP test in the best possible way.

Prepare as you would for a competition

If you want the most realistic measurement of your current fitness level, you should approach your FTP test as if it were a race.

That means being as rested as possible – but not so rested that you’re out of shape. Take the test with fresh legs and you’ll get a true reflection of your power. Take it when you’re tired and you’ll end up training in power zones that are less than ideal.

You’ll also want to get enough rest the night before, and you should be fueled and hydrated to ensure your best performance.

Preparing for  competition doesn’t mean going all-or-nothing. A good FTP test should be as sustained as possible. It’s not about getting a lot of watts early on and then suffering because you’ve spent too much power too early.

Watch your numbers and start cautiously. If you feel comfortable, push the pedals a little harder as the minutes progress.

Most athletes aren’t used to performing long, hard intervals like an FTP test. They rarely have to put out such high watts for so long.

Because of this, it’s natural to have doubts about your ability, and even some fear, when facing the test. Put fears aside and put your brain in FTP mode.

If you’re taking the test indoors, it’s essential that you take steps to maintain adequate cooling. Otherwise, you’ll be conditioning the test, and your result will be off. Don’t forget to put a good fan in front of you.

This is the only way to foster sweat evaporation and help body thermoregulation indoors. Without airflow, your body can’t sweat properly, so your temperature rises and your “engine” overheats, leading to decreased performance.

Get the pain out of your head

Inevitably, an FTP test ends up being painful. Luckily, taking it on the trainer allows for many distractions. Take advantage of any of them to think about anything except your pain and suffering. Music or a sports video can help a lot.

The best way to let go of your FTP test fear is to become the test’s friend. The more of these tests you do, the more accustomed you’ll become to them and the less anxiety they’ill create.

You’re not going to do a 20-minute test every week, but it is recommended that you perform predictive performance testing every 4 to 6 weeks. It will help you assess your fitness progression.

The first test can be an unknown quantity; but if you already have some recent data, it will be much easier to dose your power so you finish the test properly exhausted and have the most accurate numbers.

BKOOL is the most complete cycling simulator on the market – try it FREE for 30 days!

Indoor cycling: how to maximize your training space

Are you up for the Fietssport Sunset Tour?

This week, we finish on gravel and build on Stage of the Day

FTP tests and your training zones

Ready to train at BKOOL this week?

Are you up for the Fietssport Sunset Tour?

This week, we finish on gravel and build on Stage of the Day