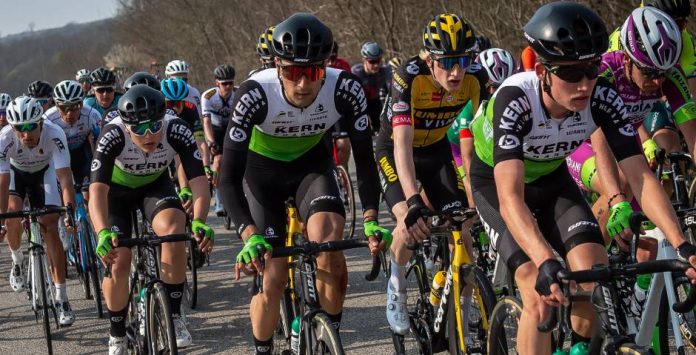 The general manager and sports director of the Kern Pharma Team, recently promoted to the UCI ProTeam category, tells us how the team members use the indoor cycling platform to train

We spoke with the leader of one of the most exciting and promising projects in Spanish cycling recently. The Kern Pharma Team has just released its UCI Pro Tour category with participations in races such as the Volta a Catalunya and the Vuelta al País Vasco, in which it has starred great performances. With additions such as Igor Arrieta and Iván Cobo, Spanish champions in the U23 category, Kern Pharma continues to strengthen its commitment to young talent in a season in which they are proving that their future has no limits.

Throughout its journey, the Galibier Sports Association has seen 60 of its pupils reach professionalism. Among them are:

Kern Pharma Team, through its Manager and Sports Director, who also was a professional cyclist between 2006 and 2014, Juanjo Oroz, has answered the questions that we had for them from BKOOL.

What does it mean for Kern Pharma Team to have the support of BKOOL, both in terms of the brand and the cyclists on the team?

In terms of sports, BKOOL provides us with new technology and a new training system. However, its value as a link between the Kern Pharma Team and cycling fans is also very important for us.

Of all the members of the team, who enjoys smart trainer sessions the most?

Among the cyclists, Ibon Ruiz is the biggest fan. The other riders also use it, especially in winter. However, in our case the use of BKOOL is not exclusive to the riders, but the members of staff themselves are regular users of this application. For all team members, BKOOL is a different and entertaining way of doing sport: practically a video game!

Do you incorporate specific smart trainer sessions into your training schedule, or is it used more for warm-ups and cool-down laps?

On very cold days or in bad weather, getting back on the smart trainer is a very good habit that we try to inspire in our riders. The smart trainer and BKOOL are also the first contact with the bike after an injury, to regain the feeling of pedaling. And, of course, we often use the smart trainer for specific warm-ups before a race.

Are there any routes within the simulator that you do on a recurring basis?

There is a lot of variety and I wouldn’t dare to specify one. I would say that we really enjoy the outings shared with amateurs. This year, for example, we held a session on the route of the CRI of the Volta a Catalunya in Banyoles, and another on the final kilometres of a Trophy of the Challenge of Mallorca. In both we gathered several hundred people and it was a great experience.

Talking about current events, what calendar do you have ahead of you, and in what events are you especially interested?

In July we are taking a short break to prepare thoroughly for the second part of the season. We want to do very well in the Spanish calendar: races like Ordizia, Castilla y Leon, San Sebastian, Getxo, Burgos etc. are important for us. Also the Volta a Portugal, which is a rite of passage for the big tours. In September we will also compete in several stage races that we want to make the most of, because the growth of the team is very good and every race is an opportunity to prove it.

Will we see you in October in the virtual Giro d’Italia?

We will be there. For us it will be a real pleasure to participate in this event.

Juanjo Oroz, Sport Director of the renowned Kern Pharma Team, says goodbye, assuring that they will participate in the Virtual Giro d’Italia that will take place in October. In this competition you will be able to ride with your friends and measure yourself against the greatest people from the world of cycling.

Slow training in cycling: why you need it to go fast

Cycling performance tests: what are they and when are they performed?

How to set cycling goals for a successful season

Slow training in cycling: why you need it to go fast

Cycling performance tests: what are they and when are they performed?