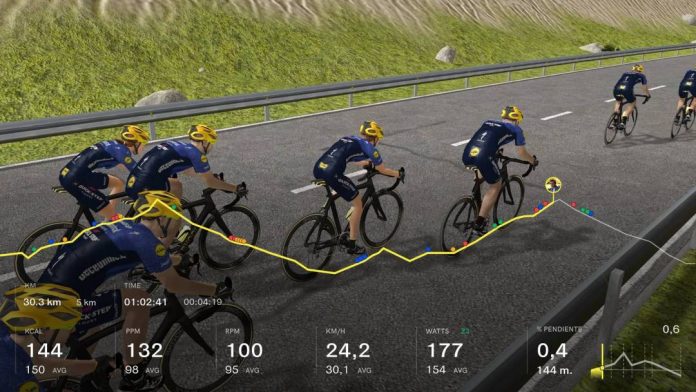 It all started just a few months ago, back in February. The first point of contact with Deceuninck Quick-Step was the event The Wolfpack: A day in hell, a virtual experience in which their riders would take to the pavé alongside hundreds of BKOOLers from all over the world. We knew that the Group Ride would be a great success given the level of the riders who were taking part, but the best news came from the team itself. As we heard from Deceunick Quick-Step, they were impressed with the usability and realism of BKOOL, which became a key starting point for forging the deal.

Through this collaboration, their cyclists and coaches will be able to take advantage of the different possibilities that the BKOOL platform offers, both to carry out indoor sessions based on structured workouts, and to use the simulator as a tool for recognising the stages of their future races.

In addition, the Deceuninck Quick-Step will also look at the system as a social platform, helping them to connect with their followers all over the world and offering added value to the team and its sponsors within an online environment focused on cycling. This will be made possible through mass events where their professional cyclists will be able to ride with their fans inside the simulator. You will have news very soon!

After his experience with the BKOOL platform at The Wolfpack: A day in hell, Deceuninck Quick-Step rider Davide Bellerini commented: “I really enjoyed using the BKOOL platform during the event in February. Once the system was setup it was very easy to use and to be able to see real time video footage as I rode, gave a great feel. I am looking forward to using the BKOOL system regularly, as part of my training in the future.”

In the words of Alfonso García-Lozano, co-CEO of BKOOL: “We are especially pleased and proud to join a top team like Deceuninck – Quick-Step. For a brand like BKOOL, with big objectives and an important desire to
grow globally over the next few years, being next to such a successful team is a privilege and we are sure that together we will create great environment for cycling fans.”

Are you looking forward to riding with The Wolfpack? The #1 ranked team in the UCI rankings joins #TeamUnlimited!

Ready to start December on the smart trainer?

Maximal aerobic power: what is it and why is it important in cycling?

Ready to start December on the smart trainer?

How to combat lack of motivation when there are no competitions

Maximal aerobic power: what is it and why is it important in cycling?